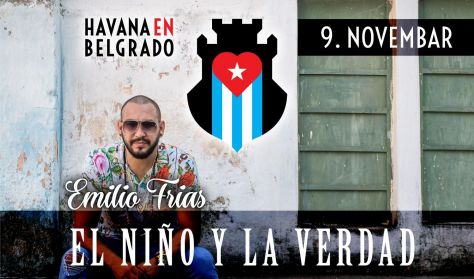 Emilio Frías, better known as "El Niño", is a Cuban singer and composer, born in Havana.

Emilio Frías, better known as "El Niño", is a Cuban singer and composer, born in Havana.

From a very young age he showed a strong vocation for music, and in particular, for traditional rhythms. He was part of the movement of amateur artists, and had the opportunity to perform at various festivals in which he obtained multiple awards. At the age of 14, he formed his first musical group with which he also received a great prize.

When he was 17 years old, he joined the group "Tumbao Habana", under the direction of Pascual Cabrejas and became known as the lead singer with the hit "El Padrino", a song of his own inspiration. At 21 he joined the orchestra "El Charangón de Revé", where he made a tremendous waste of his skills as a sonero and original improviser. At that time Elito Revé baptized him as "El Niño".

In 2012 he joined the pianist Pachy Jr, son of the director of "La Original de Manzanillo", to record several solo songs that allowed him to experiment with his own sound and satisfy his musical interests, not with the intention of abandoning his work in "La Revé". However, the response of fans to his music was so overwhelming, that in March 2013 he decided to leave "La Revé" to start his own project, which he named "El Niño y la Verdad", a group with which defends genres, such as rumba, son, guaracha and trova. It integrates the guitar with the classic striped of the traditional son and the bongo, in addition to a harmony that makes the sound of the group unique. The name of the orchestra is also the declaration of its mission: to create true music, based on the traditional Cuban genres.Izvor: Salserbia.com